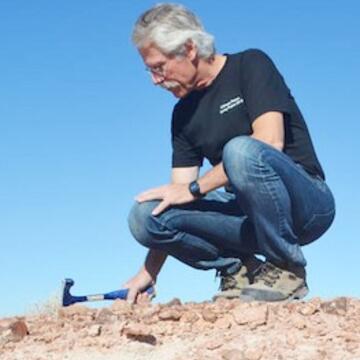 Professor Paul Olsen is the Arthur D. Storke Memorial Professor of Earth and Environmental Sciences in the Department of Earth and Environmental Sciences at Columbia University’s Lamont–Doherty Earth Observatory. He serves as the research associate at the Carnegie Museum of Natural History, the American Museum of Natural History, and the Virginia Natural History Museum, from which he received the Thomas Jefferson Medal for Outstanding Contributions to Natural Science in 2015. He was elected to the National Academy of Sciences in 2008.

Professor Olsen’s overall area of research includes the evolution of continental ecosystems (including their external and internal controls and their biological and physical components). He is especially interested in the pattern, causes, and effects of climate change on geological time scales, mass extinctions, and the effects of evolutionary innovations on global biogeochemical cycles.

Professor Olsen and his students have engaged in multidisciplinary projects including: drilling more than 20,000 feet of core from Triassic lake deposits in New Jersey to understand the influence planetary orbits on Earth's climate and solar system chaos; detailed analysis of the great mass extinction 200 million years ago that set the stage for the dominance of the dinosaurs; excavations at major fossil vertebrate sites throughout North America, China, and Morocco; and evolutionary processes mediating global carbon cycling.

His approach is to use whatever techniques are available to understand ancient earth's biological and physical systems, and consequently, students involved in these areas have used a broad range of disciplines including structural geology, palynology, geochemistry, geophysics and paleontology.

He received his B.A. in Geology, with honors, from Yale University, and his M.Phil. and Ph.D. in Biology from Yale University. His doctoral thesis analyzed the evolution of lake ecosystems. He was a Miller Postdoctoral Fellow in Basic Research at UC Berkeley from 1983–1984.